What is sexting and what are the risks involved for teenagers? A free digital parenting guide.

Many parents think that sexting involves 2 people sending either risqué or explicit text messages to each other.

These photos are then typically sent to the teen’s boyfriend or girlfriend and usually sent either by text message or via a messaging service such as Kik messenger, Snapchat, or via Instagram Direct message or Vine direct message.

Why do kids sext?

We were all young once and we all did things we knew we shouldn’t do.  It might seem obvious to us as parents why taking and sharing explicit images is full of risk but teenagers don’t always see the risk.  The typical reasons why teens engage in this are;

How prevalent is it?

Studies done in Ireland, the UK and the US indicate that a significant percentage (60%) of teenagers are being asked to take nude or sexual images of themselves with many going on to take images or videos of themselves (40%) and  then between 20% – 25% actually sending the images on.

In 2013, The NSPCC’s head, Peter Wanless, said “sexting” was getting much more common. “Sexting is increasingly a feature of adolescent relationships,” he told BBC Newsnight. “It is almost becoming the norm that a young person in a relationship should share an explicit image of themselves,” he said. (source BBC news).

According to Dr Maureen Griffin, who has presented about cyber safety in over 300 Irish schools, “As part of independent research conducted for a number of secondary schools in Ireland, 1 in 4 students admitted to sending or receiving sexts.  Although the practice was most common amongst 3rd year students, it was observed from students in 1st year to Leaving Certificate. ”  Source www.thejournal.ie.

A 2013 survey by the NSPCC in the UK found that

These studies do not mean that your child is involved in sexting or is likely to be.  If 1 in 5 teens are doing something it is not an epidemic.  However, the studies do indicate that it is a prevalent part of their environment (60% get asked to send a sexual image) and it is a risk that they are likely to become exposed to in their teenage years.

Therefore, it is vital that your child fully understands the dangers involved in terms of what can go wrong and the consequences for them.

What tools do kids typically use when sexting?

There isn’t one specific tool or site that teens use for sexting.  Instead, it occurs  in their everyday interaction when using text messaging or mobile messaging apps.  Here is a list of the more popular apps and networks;

However, sometimes explicit images get forwarded on by the recipient via  text message or email to other friends at school and once this happens they sometimes end up being distributed via Twitter or Facebook.

What are the dangers and risks?

There are many dangers and risks associated with sending or receiving sexts that you and your child need to be aware of.

The recipient can decide to forward the image to other people who in turn forward it on. 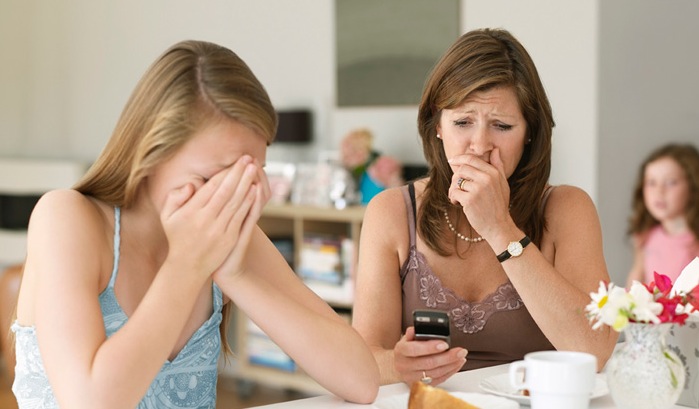 The short term consequences of this can include

If this happens, the health risks for your child are serious, especially as the image keeps reappearing in social media. There is no way to undo what has been done and this can lead to;

Do explicit “sexting” images really end up on social media?

Unfortunately the internet is full of images that were probably sent to a teenage partner in confidence and then got forwarded on, eventually becoming distributed on social media.

Twitter and Tumblr are awash with these types of images – a simple search on twitter for #nudeselfie brings up hundreds of examples far more graphic than the example below and in most cases the girl’s face is visible.

Do teens end up becoming humiliated and committing suicide?

No. Most teens whose photos are forwarded do not commit suicide.

However, it is a real risk and there are plenty of high profile examples of teens sending a sext which got forwarded on and then widely distributed – leading to the child suffering humiliation, depression and leading to suicide. We will cover some examples shortly.

The long term consequences of this can include

If this happens, the social risks for your child in the future include;

2. If your child receives and forwards an explicit image  …

Does this ever happen?

As the emotional consequences of sexting gone wrong have become more common, there have been more instances of people being convicted.

An example is Phillip Alpert, a Florida teen, who, after he split up with his girlfriend, sent nude photos she had taken of herself and had sent to him when they were dating to 70 people.  Alpert was arrested, convicted and given probation for distributing child pornography.  He is now a registered sex offender.