A parents guide to Vine

Vine is a social media app that you use on your smartphone. It was  launched by Twitter in January 2013. You can create a 6 second video using your smartphone and when you post your video it will then appear in your friends’ news feed and when they post a  video it will appear in yours.  Users can comment,  “like” a post and “revine” it (Share it with their followers) 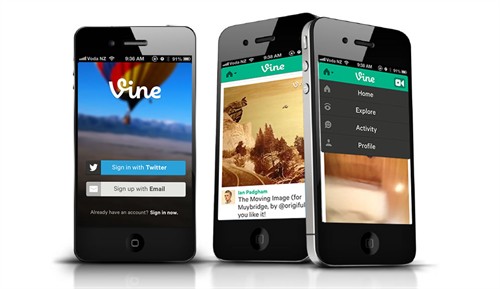 Many celebrities, sports stars, musicians are now on Vine.  Anyone can follow them and receive their video updates. Tweens and teens would follow celebrities but they would also follow friends to keep in touch with them.
What age is it suitable for?

When signing up for Vine you do not need to enter your age so anyone can sign up for it.

In this parents’ guide to Vine we will explain why kids like using it, what dangers you need to be aware of and how to advise and protect your child.

Tweens and teens  love using it because;

Vine  is a very creative environment for teens but given that they are sharing videos taken on their smartphones there are risks that  you should be aware of as a parent.

When writing this guide in  July 2014 I have noticed that just in the last month they have made it much harder for users to stumble upon or find this material which is a great improvement.

However, be aware that your  thirteen year old can follow anyone on Vine and if they follow 18-19 year olds, the videos a typical 18-19 year old would share on Vine might be  inappropriate for a 13 year old.

Cyberbullying on Vine doesn’t mean someone being criticised or put down as a once off event or a very occasional event.  When someone is cyberbullied it means that they are regularly and consistently being criticised or mocked for their looks, weight, intelligence, style, grades, popularity and so on.

On Vine this bullying can take the form of;

In 2014,  an embarrassing video of a boy was taken in a school bathroom and after it went viral he was bullied so badly over it that he committed suicide.  According to the ABC 10 News channel;

“It went viral. It went beyond his school. It went to other schools in California. Kids in the neighborhood who didn’t go to Matthew’s school had heard about it and seen the video that was taken of him,” said his Aunt.  “Kids saw this video and began to tease Matthew mercilessly — they teased him, they harassed him.  They made his life miserable over a two-week period.”  His family said it was after those two weeks of bullying that Matthew took his life.

3. Inviting stranger danger – your child sharing too much on an open account

Lots of teens give away too much information about themselves on Vine which exposes them to being approached or groomed by strangers. These include;

Next Step – To address these issues parents should learn

How to advise your child on using Vine

How to monitor what your child is doing on Vine